Everything you need to know about Web 3.0

Evolution Story of the Web 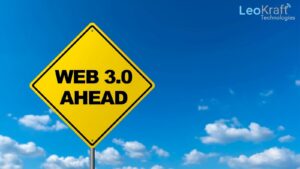 The web has evolved a lot over the years, and its vast array of applications have almost become unrecognizable from its early days. The evolution of the web can be clearly partitioned into three phases:
● Web 1.0,
● Web 2.0, and
● Web 3.0

Web 1.0 was the first iteration of the web which can be referred to as the ‘Read-only web’ and approximately lasted from 1991 to 2004. As most of the participants themselves were the consumers of content, and the creators were developers who built websites that contained information served up mainly in text or image format. Hence, Web 1.0 comprises websites serving static content instead of dynamic HTML. Also, the data and content were served from a static file system rather than a database, and the websites didn’t have much interaction.

In the Web 2.0 world or more popularly the ‘Social and interactive web’, you don’t necessarily need to participate in the creation process such that if you want to craft a thought and share it with the world, you simply can. Many applications have been built in a way that they easily allow anyone to be a developer or a creator. You can easily upload a video and allow millions of people to see it, interact with it, and comment on it.

Therefore, Web2 is way simpler, and because of its simplicity more and more people around the world are becoming mighty creators. Even though the web in its current form is doing great, there are some areas for further improvement. In the Web2 world, many popular apps are following a common pattern in their life cycles while there are a few limitations in this interactive web world.

One of the most common occurrences in Web 2.0 applications is data breaches. You have no control over your data or how it is stored here. In fact, businesses frequently track and save user data without users’ permission. The firms in charge of these platforms manage all of this data and the users who live in those nations where the negative implications of free expression are a major concern fall in danger

When governments believe someone is expressing an opinion that contradicts their propaganda, they frequently shut down servers or seize bank accounts. Governments have the authority to easily interfere, control, or shut down applications when they use centralised servers.

Governments have consolidated control over banks since they are likewise digital. Governments can easily interfere, control, or shut down applications when they use centralised servers. They frequently intervene in banks since they are likewise digital and under centralised control. During periods of high volatility, political instability, or excessive inflation, they can close bank accounts or restrict access to funds. Many of these flaws are being addressed by Web3, which attempts to radically rethink how we construct and interact with applications from the ground up.

There are a few key distinctions between Web2 and Web3, but decentralisation is at the heart of both. Web3 is an up-gradation of Web2 by adding a few new features. Web 3.0 stands for:
● Verifiable
● Self-governing
● Permissionless
● Distributed and dependable
● Stateful and native

Web3 developers rarely create and deploy apps that run on a single server and store data in a single database (usually hosted on and managed by a single cloud provider). Instead, Web3 applications use blockchains, decentralised networks of numerous peer-to-peer nodes (servers), or a hybrid of the two to create a crypto-economic protocol. These programmes are known as dapps (decentralised apps), and you’ll hear that term a lot in the Web3 community.

The network participants (developers) are rewarded and compete to deliver the highest quality services to anyone using the service in order to establish a stable and secure decentralised network. When it comes to Web3, Bitcoin is often mentioned. This is due to the fact that many of these protocols rely heavily on cryptocurrencies.

These monetary incentives (tokens) offer a variety of services and help in the creation, governing, contributing to the projects that were formerly provided by cloud providers. So, now the common people are able to make a living by taking part in these protocols.

Consumers of the service typically pay to use the protocol, similar to how they would pay AWS today. With the exception of web3, money is distributed directly to network participants. In the coming days with many forms of decentralisation, unneeded and frequently wasteful intermediaries are eliminated.

Many online infrastructure protocols have produced utility tokens that dictate how the protocol runs, for example, Livepeer, Arweave, Filecoin, etc. Participants at all levels of the network are rewarded with these tokens, just like how even native blockchain technologies like Ethereum works.

Tokens facilitate a borderless and seamless native payment layer. For example, Stripe and Paypal have been able to generate billions of dollars in value by facilitating electronic payments. These methods are very complicated and don’t allow for international interoperability among its participants as in order to use them, you must also provide over sensitive information and personal data.

Web3 as a novel approach to business formation

Tokens also facilitate tokenization and the establishment of a token economy. Say you want to start your own software company, but in order to build it, they will need money to maintain themselves.

To get funds, they hire venture capitalists and give up a portion of the company. This investment immediately introduces misaligned incentives that will, in the long term, prevent the best user experience from being built. Also, even if the company succeeds, it will take a long time for everyone engaged to receive any of the value, which might lead to years of labour with little actual payoff.

Stakeholders can vote with their tokens on changes to the project’s future, and those who helped construct it can sell some of their holdings to profit after the tokens are distributed. People who believe in the initiative can acquire and hold shares, and others who fear the project is heading in the wrong direction can sell their shares.

Purchasers have complete transparency over what is happening because blockchain data is completely public and accessible. This is in contrast to purchasing stock in a private or centralised company, where many details are generally kept hidden.

This is already taking place in the Web3 world. DAOs (Decentralized Autonomous Organizations), which provide an alternate way to create what we’ve historically thought of as a corporation, are garnering a lot of traction and funding from both traditional developers and venture capital organisations.

In Web3, how does identity work?

Identity in Web3 functions uniquely. The majority of the time, IDs in Web3 apps are related to the wallet address of the person interacting with the app.
Wallet addresses are fully anonymous unless the user chooses to link their own identity to it publicly, unlike Web2 authentication techniques like OAuth or email-password (which almost usually require users to send over sensitive and personal information).
If a user chooses to use the same wallet for various dapps, their identity is smoothly transferred between them, allowing them to build up their reputation over time. While living on the internet, the next phase of the internet could syphon power away from Big Tech.

● As Web 3.0 is the internet’s third generation, it will be built on the blockchain.
● It will be decentralised, which means it will not be governed by the mega-companies such as Facebook or Google.

Instead of enormous corporate servers like Amazon Web Services, your movements may be tracked on the same digital backbone that enables cryptocurrencies like bitcoin – blockchain. And this new version of the internet will not be governed by a single organisation, as Facebook, Google, and others do with their own empires.

Welcome to Web3, the successor to Web2 — the current era, in which tech behemoths control the majority of the market. When we moved from reading content on websites to a more sociable internet, Web1 created Web2.

Web3, like so many other ideas about the internet’s growth, is still only a concept, or even vaporware, a term for overly-hyped technology that has yet to be realised. It may possibly not prove to be as helpful as intended (look at how social media turned out.). However, many proponents argue that just like cryptocurrencies and the metaverse, Web3.0 is the way of our future.